Home News At last, you can now get… REDEMPTION!

At last, you can now get… REDEMPTION! 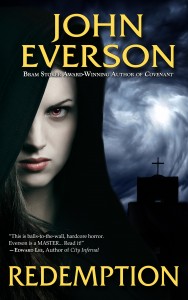 Dark Arts Books has released REDEMPTION, the final book in John Everson’s horror trilogy that began in his Bram Stoker Award-winning first novel, COVENANT. If you like your horror fiction filled with demons and depravity… this is the novel for you! The e-book and trade paperback are both now available on Amazon.

Hardcore horror’s patron saint, Edward Lee, author of Haunter of the Threshold, City Infernal and Header said this about the new novel:

Everson is a MASTER of the hardcore; he’s the rare kind of writer who’s so good you can’t proceed with your day until the book is finished.  No matter what you have planned, forget it; you won’t bother until you’ve turned the last page. (I missed a playoff game because of this book!)  Everson kicks out the jambs in this gory story of haunted religious missions, mind-boggling sex-rituals, and jaunts into Hell (and let’s not forget the communal demonic toilet!)  The Little Mermaid this ain’t. This is balls-to-the-wall, no-f–ing-around hardcore horror that hits the reader with the impact of a bucket of hot blood and innards in the face.  Read it!”


Redemption is Everson’s first novel since 2014’s The Family Tree, and picks up immediately after his second novel, 2007’s Sacrifice left off.  Covenant, Sacrifice and Redemption are all Kindle Select titles, which means subscribers to the Kindle Unlimited program can read all three books in the trilogy for free as part of their subscription.

View all three books in “The Curburide Chronicles” trilogy here. 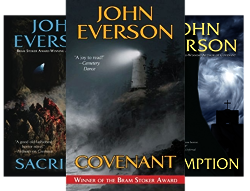